Organized crime is a category of transnational, national, or local groupings of highly centralized enterprises run by criminals to engage in illegal activity, most commonly for profit. Some criminal organizations, such as terrorist groups, are politically motivated. Sometimes criminal organizations force people to do business with them, such as when a gang extorts money from shopkeepers for "protection".

European sociologists define a “mafia” as a type of organized crime group that specializes in the supply of extra-legal protection and quasi-law enforcement. 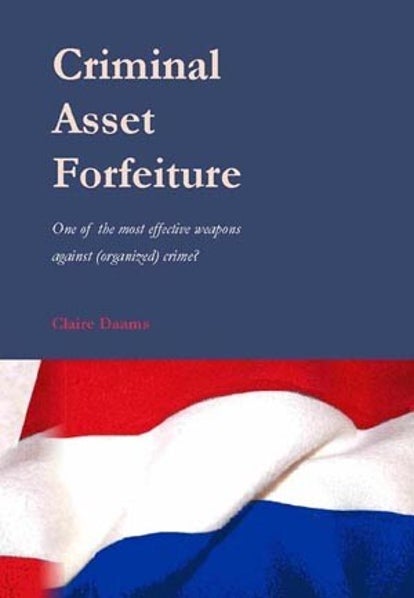 Since the latter part of the 20th Century, governments have sought new approaches to curb the impact of organized crime on economic development, democracy, and the rule of law. Its threat to society is partially caused by the high financial profits that organized crime often is supposed to generate. Governments are of the opinion that crime should not pay, and often cite these threats as reasons to explain their intervention. This is one of the reasons they try to reduce the availability of the proceeds of crime in order to destabilize the structure of organized crime. They attempt to do so by two means: confiscation of the proceeds of crime and criminalization of money laundering.

The focus of this book and research is on the confiscation and more specifically criminal asset forfeiture of the proceeds of crime. The author examines the situation in The Netherlands, Switzerland and the United States of America.In order to address the issue of its suitability and effectiveness, the legal foundations of criminal asset forfeiture should be understood.

We have published already many years the United Nations and the fight against Terrorism.