Indigenous peoples, also referred to as First people, Aboriginal people, Native people, or autochthonous people, are ethnic groups who are native to a particular place. Indigenous first emerged as a way for Europeans to differentiate enslaved black people from the indigenous peoples of the Americas, being first used in its modern context in 1646 by Sir Thomas Browne, who stated "Although... there bee... swarms of Negroes serving the Spaniard, yet they were all transported from Africa... and are not indigenous or proper natives of America."

Peoples are usually described as Indigenous when they maintain traditions or other aspects of an early culture that is associated with a given region. Not all Indigenous peoples share this characteristic, as many have adopted substantial elements of a colonizing culture, such as dress, religion or language. Indigenous peoples may be settled in a given region (sedentary) or exhibit a nomadic lifestyle across a large territory, but they are generally historically associated with a specific territory on which they depend. Indigenous societies are found in every inhabited climate zone and continent of the world except Antarctica. It is estimated that there are approximately five thousand Indigenous nations throughout the world.

The vast majority of Indigenous nations and peoples globally were displaced by European colonialism over the past five centuries and are now incorporated into political constructs known as states. Indigenous peoples continue to face threats to their sovereignty, economic well-being, languages, ways of knowing, and access to the resources on which their cultures depend. Indigenous rights have been set forth in international law by the United Nations, the International Labour Organization and the World Bank.

In 2007, the United Nations issued a Declaration on the Rights of Indigenous Peoples (UNDRIP) to guide member-state national policies to the collective rights of Indigenous peoples, including culture, identity, language and access to employment, health, quality education and natural resources.

Estimates of the total global population of Indigenous peoples usually range from 250 million to 600 million. This is because official designations and terminology on who is considered Indigenous vary widely between countries. In settler states colonized by Europeans, such as in the Americas, Australia, New Zealand, and Oceania, Indigenous status is generally unproblematically applied to groups descended from peoples who lived there prior to European invasion and settlement. In Asia and Africa, where the majority of Indigenous peoples live, Indigenous population figures can be much less clear as states there drastically reduce the number of Indigenous peoples.

The Rights of Indigenous Peoples

In this series, a complete overview of the various instruments dealing with the rights of indigenous peoples is being presented.

The collection is divided into several different volumes, providing wide-ranging insights in the rights of indigenous peoples, thus offering a valuable legal tool for academic collections.

The first volumes of the section contain selected basic documents and background materials, focusing on the various international human rights tools, dealing with indigenous rights, as well as on the ILO Conventions that were the first legal instruments for protecting the rights of indigenous peoples. Next to that, the United Nations framework is included, varying from general documents to the collection of reports of the Special Rapporteur on the Situation of Human Rights and Fundamental Freedoms of Indigenous Peoples. The following volumes address issues, such as: The Martinez Cobo studies; language and education; nature, land and territories; health; children; discrimination and equality. The first mechanism ever to protect the rights of indigenous peoples has been developed by the International Labour Organization (ILO).

If you want to order these books please send a mail to: info@wolfpublishers.nl 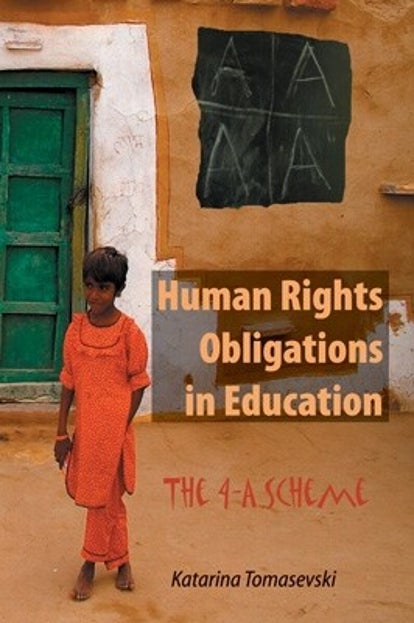 This book describes how human rights safeguards should be applied in education.

Its point of departure is the fact that education can – and does – violate human rights, notably when it is imposed upon the indigenous or minorities so as to obliterate their identity. Human rights are defined as safeguards against abuse of power, whose counterparts are governmental human rights obligations. These are to make education available, accessible, acceptable and adaptable, hence the 4-A scheme. The purpose of human rights work is to expose and oppose abuses of power. They can be detected in the very design of education strategies. Defining availability of primary education as a development target, removed into distant future, negates the right to education and the corresponding governmental obligations, individual and collective.

The book uses examples from different regions to describe safeguards that are necessary to transform political promises into legal obligations. Where education is available, access may be conditioned by purchasing power rather than defined as a human right. Denials of the right to education include discrimination against non-citizens or girls. They demonstrate the crucial import of human rights, the need to differentiate between poverty- and policy-based exclusion from education. Acceptability of education entails ensuring that education does not violate human rights and is worthy of its name. Typical human rights cases have challenged, in all corners of the world, the language of instruction, censorship of textbooks or harassment of teachers for introducing human rights education. Also, human rights challenges are epitomized in the requirement to adapt education to the learners, to recognize them as subjects of rights. On the micro-level, adapting education to children with disabilities has triggered human rights challenges world-wide. On the macro-level, adaptability tackles the very design of education. Graduate unemployment illustrates shortcomings of treating education as a self-contained sector as do choices between public and private, secular and religious, segregated andall-inclusive education.

The book is published by Wolf Legal Publishers, jointly with the European Association for Education Law and Policy.

Katarina Tomasevski was Professor of International Law and International Relations at Lund University (Sweden) and, from 1998-2004, she was Special Rapporteur on the right to education of the United Nations Commission on Human Rights. The book draws on her experience in carrying out country missions in countries as different as the People’s Republic of China and United States of America, and facilitating redress for human rights violations in education world-wide. 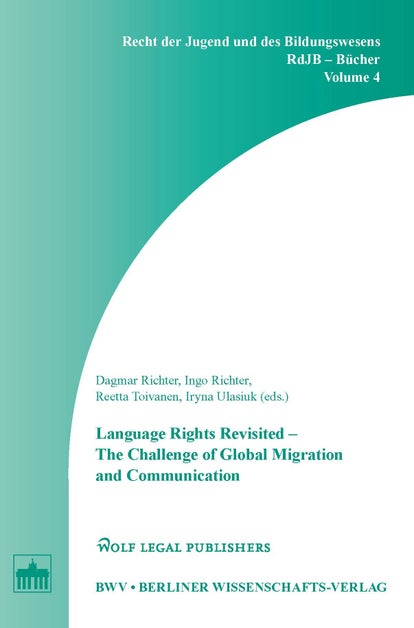 above all, in Europe, yet is nowhere near passing its acid test in other parts of the world. Examples show that it is not only a question of linguistic autonomy, but of ethnic and religious conflicts, which are simmering in the foreground. Hence, there are reasons for doubting whether international agreements designed to guarantee linguistic autonomy can solve these conflicts. The protection of indigenous languages is justified largely by the principle of diversity and is derived from ecological principles. However, only people who wish to take advantage of their rights will succeed in safeguarding these rights. A language that nobody speaks or wants to speak will die. Biologists have convinced us that biodiversity preserves the balance of life on earth, cultural theoreticians however have yet to deliver evidence to this effect. Global migration has now created further problems for language regimes in many different countries. These global migration processes are creating linguistically heterogeneous populations in many countries for which the law has not created appropriate language regimes. Global communication obeys rules that differ greatly from the methods used in teaching foreign languages at school. The English used in global communication is not the “academic English” that is taught at school, but something very different: a language that has evolved within the context of global communication. This development allows people to create languages flexibly and inventively. It cannot, however, be grasped with the existing conception of language rights. Language rights have appeared so far in two different forms, namely: as the legal basis of self-government, and as the legal basis of individual human rights. Considering the challenges by global migration and communication, far too much is expected of the first of the two aspects and that it is, therefore, unsuitable for solving the problems. Universally valid individual human rights definitely contain the potential for supporting what is an essential revision of language rights.

I write with the right 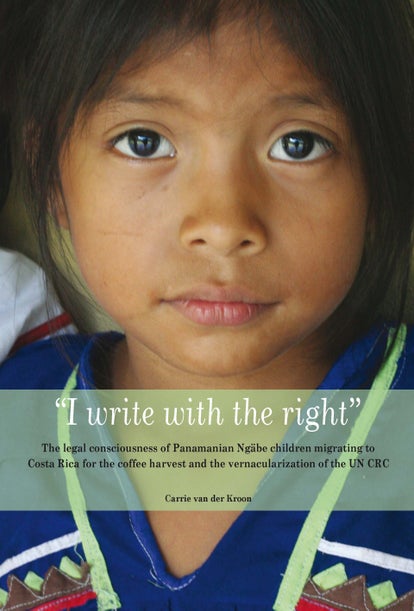 I write with the right

Alejandro (9 years) goes to school half days and otherwise “plays” on the finca, the coffee plantation. He points towards his older sisters: “They cannot read and do not go to school.” Libia (14 years), also a sibling, explains: “They harvest coffee instead.”

Thousands of Panamanians of the indigenous Ngäbe-Buglé peoples travel every year to Costa Rica to harvest coffee, mostly temporarily. They come from difficult circumstances: over ninety per cent of this group in Panama lives in extreme poverty. A majority of the migratory children (of all ages) work on the coffee fields.

This book sheds light on the world of indigenous Ngäbe-Buglé children, migrating and working from Panama on the Costa Rican coffee fields. It demonstrates and describes their experiences. All children agree that Costa Rica is beautiful, preti, as they say. Simultaneously they speak of violence, fears and deprivations. These children are both vulnerable and resilient. Their ideas do not always coincide with adult professionals or international human rights law.

“I write with the right” illustrates children’s consciousness of internationally codified rights and the reality on the ground. It furthermore demonstrates what actors and factors influence their realities and its implications for international human rights law, policies and legal theory. 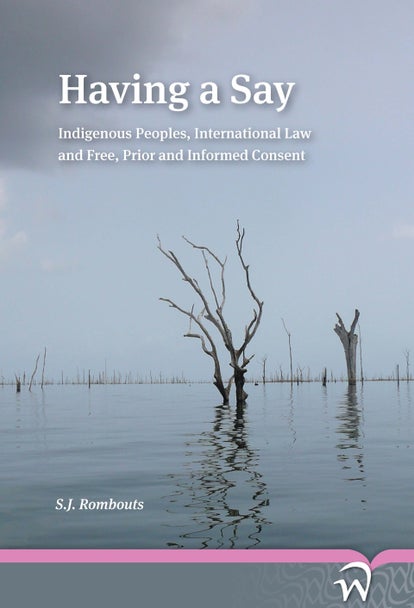 The adoption of the UN Declaration on the Rights of Indigenous Peoples in 2007 reinvigorated discussions about participation by indigenous peoples in decision-making processes that affect them. In particular, the debate revolves around interpretations of the concept of “free, prior and informed consent” (FPIC), which is becoming one of the central mechanisms in international law and policy for resolving conflicts about lands and natural resources. In this study, the legal status of FPIC and conditions for its successful implementation are examined. Firstly, the principle is contextualized by examining the underlying concept of self-determination and derivative rights to lands and resources. Secondly, FPIC is explored from within the framework of the right to effective participation. Thirdly, the existing international platforms and institutions in which FPIC norms are present are surveyed. Fourthly, a detailed analysis of recent regional case law clarifies the legal application of FPIC in the context of land and resource rights. Finally, a number of recent guidelines for the implementation of FPIC processes in the framework of specific voluntary sustainability initiatives are compared and analyzed. This study provides both a theoretical and a practical starting point for scholars, lawyers, policy makers, or others interested in FPIC processes and indigenous peoples.

Indigenous Rights, Land rights and Mining in the Upper Mazaruni 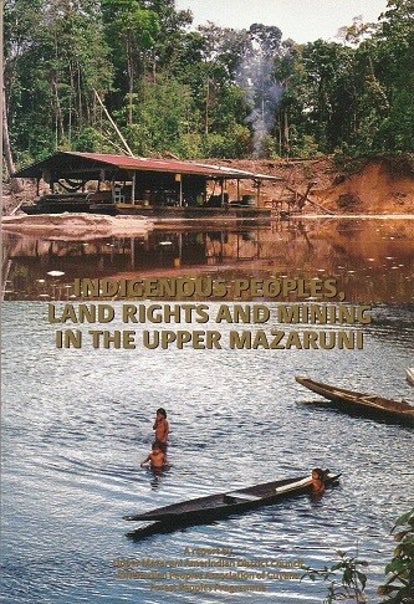 Indigenous Rights, Land rights and Mining in the Upper Mazaruni

This report is the result of the collective call made by the Amerindians of the Upper Mazaruni Amerindian District to compile a detailed report on mining so that others may hear what is happening to us and the true situation in the Upper Mazaruni. We believe that in doing this we are simply asking that our fundamental rights, especially our land rights, be respected. Many non-indigenous people in Guyana believe that the key to development is exploitation of natural resources. Must we really destroy our environment for development; must we the Amerindians pay that price. If this continues our very survival is at risk and our basic rights will continue to be violated. 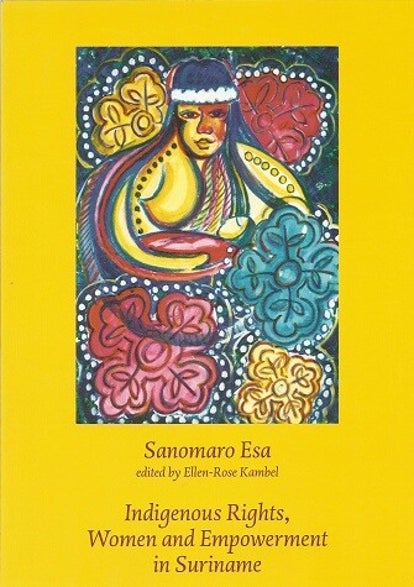 The report is in the first place intended for indigenous (women`s) organisations who might draw inspiration from our approach and proposed strategies. Also, we included some basic information about the internationally recognised rights of indigenous peoples and women, which may not be always readily available to these organisations, they might find this information usefull for this reason. Further, the report may be of interest to policy makers, both at the governmental and non-governmental levels who work with indigenous communities and women`s groups.