The law of war is the component of international law that regulates the conditions for war (jus ad bellum) and the conduct of warring parties (jus in bello). Laws of war define sovereignty and nationhood, states and territories, occupation, and other critical terms of international law.

Among other issues, modern laws of war address the declarations of war, acceptance of surrender and the treatment of prisoners of war; military necessity, along with distinction and proportionality; and the prohibition of certain weapons that may cause unnecessary suffering.

The law of war is considered distinct from other bodies of law—such as the domestic law of a particular belligerent to a conflict—which may provide additional legal limits to the conduct or justification of war.

We published a lot of series about laws of war to find out the history of law as well. 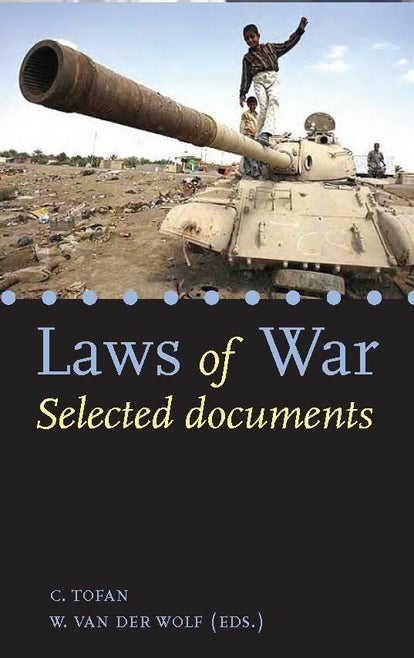 This book is the result of an extensive research on the documents and texts of the last 150 years about this subject. It is an unique collection of documents and background information. Ranging from classical antiquity to the present, we have discussed the legal and cultural regulation of violence in such areas as belligerent rights, the treatment of prisoners and civilians, the observing of truces and immunities, the use of particular weapons, siege warfare, codes of honor and war crimes.

Our book presents a culled selection of the original documents and materials, a possibility to view some documents in the context of their time, the history and the influence and concurrence of international law, national law, custom and science. But above all, it gives the reader insight in the way his ancestors and contemporaries have made this "law of war".

The combination of the various instruments makes this book a perfect reference tool for statesmen and diplomats, members of armed forces and humanitarian organisations, lawyers, journalists and students of international law and international relations. 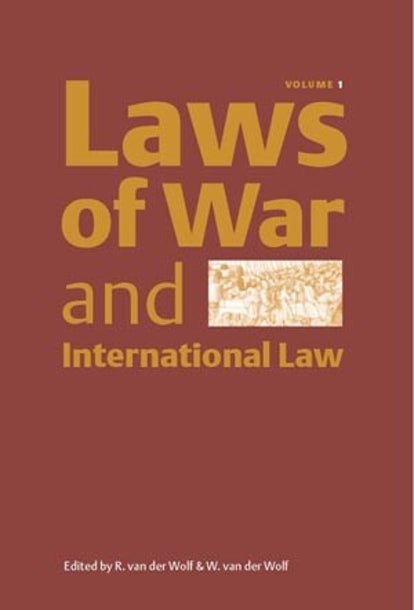 This unique collection explores not only the formal constraints on the conduct of war throughout Western history but also the unwritten conventions about what is permissible in the course of military operations.

This book is not just another collection of documents. By comparing all publications on this subject from the 19th century up to now and adding hard to find documents, the editors have made a unique collection of documents and background information. Some special documents, seldom published together, are reproduced. Ranging from classical antiquity to the present, we have discussed the legal and cultural regulation of violence in such areas as belligerent rights, the treatment of prisoners and civilians, the observing of truces and immunities, the use of particular weapons, siege warfare, codes of honor, and war crimes.

The combination of the various documents and its introduction makes this book a perfect reference tool for statesmen and diplomats, members of armed forces and humanitarian organizations, lawyers, journalists, and students of international law and international relations.

This book is the first book in the International Law Series. 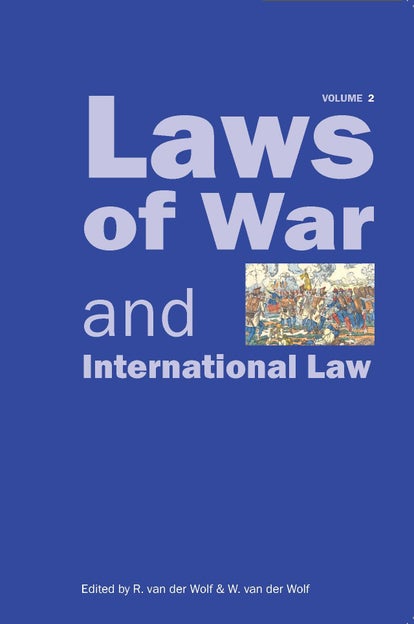 It is a vast and various field: ‘Laws of War’. In this study (just as in Volume 1) we have established that a mere enumeration of laws and regulations does not lead to a better
understanding. Some explanation has to be done to give a broader scope and understanding of the increasing effects of these Laws, Conventions, Regulations or Statutes.

The increase in and multitude of subjects of the international legal instruments since 1945 and their gradually interdependence are by shrill contrast with the only Convention in the 19th century.

In 2013 it is tempting to relate to actual ‘wars’ (Korea, Vietnam, Yugoslavia, Middle East, Lebanon, Afghanistan, Syria), facts (My Lai, Sebrenica, Dafur), persons (Karadzic, Milosevic), ‘new’ wars (on drugs, on terrorism), or threats of war (‘Cold War’). To enlighten (most of) the following Conventions, Manuals, Judgments or Statutes, we have added – around the actual text – article(s) on the subject. These articles are different from origin; some regard the subject
after the Convention was accepted (‘what were the results?’), some explain the (difficult and long) way the Manual had to undergo before it eventually was put into order.

This volume starts with a ‘general’ introduction on the subject. But as we believe sincerely that the present is inextricably bound up with the past, we present – as a broad introduction to the 150 year development of Human Rights Law and the convergence with Laws of War – the article of professor K.J. Keith, TUTTI FRATELLI? Perspectives and challenges for international
humanitarian law.

This volume has three parts. The first part focuses on the basic Human Rights instruments and International Law that originated after 1945. The second part examines the source(s) of the tribunal of Nuremberg and the corresponding principles. These principles formed the cornerstone for the tribunals yet to come (Rwanda, East Timor, Yugoslavia) and found their final outcome in the International Criminal Court.

This book is the 2nd book in the series on Laws of War and belongs to the
International Law Series. 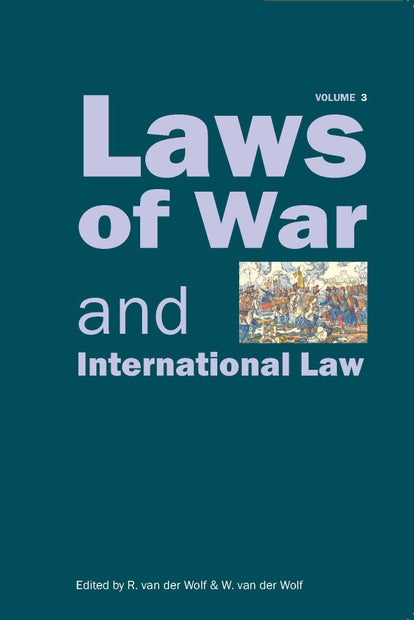 This third Volume in this series on Laws of War and International Law pertains
(with Volume 2) the period 1942 – 2012.

The laws of war were born of confrontation between armed forces on the
battlefield. Until the mid-nineteenth century, these rules remained customary in
nature, recognised because they had existed since time immemorial and because
they corresponded to the demands of civilisation. All civilisations have developed rules aimed at minimising violence – even this institutionalised form of violence that we call war – since limiting violence is the very essence of civilisation. By making international law a matter to be agreed between sovereigns and by basing it on State practice and consent, Grotius and the
other founding fathers of public international law paved the way for that law to
assume universal dimensions, applicable both in peacetime and in wartime and  able to transcend cultures and civilizations.

This treaty was revised in 1906, and again in 1929 and 1949. New conventions
protecting hospital ships, prisoners of war and civilians were also adopted. The
result is the four Geneva Conventions of 1949, which constitute the foundation of international humanitarian law in force today. Acceptance by the States of these Conventions demonstrated that it was possible to adopt, in peacetime, rules to attenuate the horrors of war and protect those affected by it.
Governments also adopted a series of treaties governing the conduct of hostilities: the Declaration of St Petersburg of 1868, the Hague Conventions of 1899 and 1907, and the Geneva Protocol of 1925, which bans the use of chemical and  bacteriological weapons.

The focus in this volume is on international humanitarian law, the prohibition of weapons and the UN.

In 2004 this first volume in this series was published. Now more than 10 years later we go in this 4th volume of the collection back in time and try to find the roots of Laws of war!

In this volume we focus on three trials in the past. These trials of 1269, 1649 and 1660 had each an aspect that reverberated in the oncoming development of the Laws of War and International Law till our present days.

We present the trials based on research in old books and factual proceedings of the trials. Our choice for these trials is hereby short elaborated.

The trial of Konradin of Hohenstaufen in 1268 was one of the first trials where the court consisted of judges from different places. The constitution of this court, its exact composition and even the question whether it was a ‘formal’ court are even nowadays not very clear. But according to contemporary writers and chroniclers a court with judges from city-states of Italy was convened. The trial of Charles I of England in 1649 is the first fully recorded trial of a reigning monarch who reigned with a Parliament. In the case of Charles I the King that was not disposed of; he was tried before (a part of) Parliament in a special commission and the trial was a political one. Charles insisted that the trial was illegal, explaining, “No learned lawyer will affirm that an impeachment can lie against the King... one of their maxims is, that the King can do no wrong”. Charles maintained that the House of Commons on its own could not try anybody, and so he refused to plead.

During the trial of Charles I one of his guardsmen, Colonel Daniel Axtell, had spoken inciting words and had urged his soldiers to humiliate the King with words and non violent deeds during his process. After restoration of the monarchy Axtell was brought before a court in 1660 and accused of these misdeeds done by him and his soldiers. He defended himself stating that he had received orders to act as he had done. His words “Dammed if I do, dammed if I don’t” (if he had disobeyed the order he could have been killed, now he had obeyed the order, he was to be killed). In the next centuries this ‘double bind’ dilemma would transform to the fundamental ear crimes issues of ‘command responsibility’ and ‘superior orders in international law.

For 2021 we have scheduled 10 new volumes in our series. These new volumes will take us back from the past to our time and explain more about the wars in Iraq, Rwanda and the Balkans. A separate volume will be presenting research materials on the crisis in Syria.

Volume 14 will take us back in time again and reveal many new interesting materials that we found in archives around the world that explain more the history of Laws of War.